On my way to the library every week or so, I pass a beautiful 1960-something red Ford Mustang that is in desperate need of some TLC. I always give it a longing look, thinking if I had the resources, I’d go up to the door and make the person an offer on that baby.

Only because I’ve got an apple red 1968 Mustang that stars in my Teen Mobster Series. Sigh.

I’ve been a pretty big Mustang fan since the moment I put a car in drive. In fact, at my wedding over a decade ago, my husband and I drove away from the church in a friend’s orange and black one. So when I started writing Accidental Mobster, I knew I wanted the main character’s car to be something near and dear to my heart.

Enter the 1968 red Mustang in book one of the series, and a second Mustang (same year) in book two. The trifecta is perfected in book three with an addition of a black one.

But my real-life experience with this particular year of classic Mustang was limited to vast Internet research until just last week. At the ice cream festival in my husband’s hometown, we stumbled upon the festival’s car show. The first time through, the only Mustang in the show was a souped-up version only a year or two old. Still cool, but not quite what this girl was looking for.

Well, in order to get to the parade, we took another trek through the show about an hour later. The result? 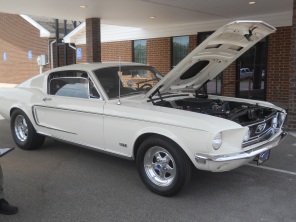 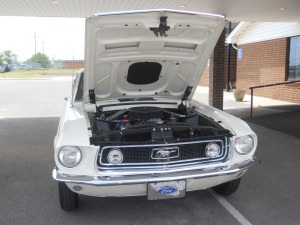 Okay, so not my dream color, but hey, any day I get an appointment up close and personal with a 1968 Ford Mustang is a good day, people! And if this car is getting your engine revved, pick up the Teen Mobster Series, because you’ll get to spend some quality time with this car!