Generally, I like to play my “next big thing” ideas close to my chest, but I was asked to join this blog hop by the talented Paulette Rae, so I decided I’d tell you a little bit about the two books that will complete the Teen Mobster Series. If you haven’t read Accidental Mobster, well, you should. I mean, that’s if you like nail-biting situations that involve the Mafia and high school. AND, it’s only $2.99 for the electronic version, which is way, way cheaper than that Starbucks non-fat vanilla chai I gulped down today.

Anyway, here’s the scoop on how the rest of this YA series is going to shake out.

1: What is the working title of your book(s)?

2: Where did the idea come from for the book?

I’ve always loved crime drama. I’m probaby the only twelve-year-old who was addicted to Law and Order. I have also scarfed down anything to do with the mob (I could sing you the intro to the Sopranos, if you were so inclined.) I also have a number of family and friends in law enforcement, which makes me pretty sympathetic to the enforcement of justice (with the exception of the random speeding tickets I keep getting on the same stupid road. Forget a breathalyzer for your car–I need enforced cruise control)..

LSS (you know, long story short), I was destined to combine my love of writing teen fiction with my obsession of crime drama.

3: What genre does your book come under?

Teen fiction. More specifically, teen crime fiction, with a heap of action, a dollop of humor, and a sprinkling of romance.

4: Which actors would you choose to play your characters in a movie rendition?

Hmmmm.  If this was made, like, next year, I think Spencer Walsh from Good Luck Charlie would be great for the role of Danny, my protaganist, Elle Fanning for love interest Portia, Dayo Okeniyi from Hunger Games for best friend Reggie, and David Henrie and Lucy Hale for Danny’s semi-siblings, Vince and Julia Vigliotti. I think Gabriel Macht from Suits for Danny’s mobster godfather, Gino Vigliotti, and Alex O’Loughlin from Hawaii Five-O for everyone’s favorite FBI agent (see pics below).

5: What is the one-sentence synopsis of your book?

When teenager Danny Higgins goes to live with a mob family, he finds that keeping secrets and using his “street smarts” is the only way to survive.

6: Is your book self-published, published by an independent publisher, or represented by an agency?

Published by the most awesomest independent publisher, Bluewood Publishing Ltd.

7: How long did it take you to write the first draft of your manuscript?

Six months. I wrote both books in the early morning hours and during my daughter’s naptimes in 2011.

8: What other books would you compare this story to within your genre?

For the series: think Mario Puzo’s Godfather got cleaned up and went to high school.

9: Who or what inspired you to write this book?

My respect for law enforcement and my value of family greatly influenced this series.

10: What else about your book might pique the reader’s interest?

It’s not like most of the young adult novels out there. These books are not ooey-gooey romance or paranormal craziness. If you like shows like Castle, Criminal Minds, or the Sopranos, you’re probably going to enjoy this series. And even though the series is appropriate for readers as young as 12, I have had many adults email me to say how much they enjoyed Accidental Mobster and look forward to the next two books.

Now, if you are looking for some more great fiction, you should definitely check out these other authors.

Paulette Rae – This sizzling romance author has an exciting new project with, gasp!, a hitchhiker. Check out the details here.

K.D. Berry – This fantasy author team is responsible for the award-winning Dragon’s Away.

L.M. Fry – For a fun read with a sassy thirteen-year-old protagonist, check out L.M. Fry’s Soul Seer. Major plus is the hilarity that follows with having a large family.

My dream cast for the Teen Mobsters Series: 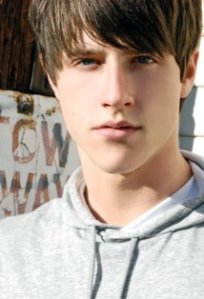 Alex O’Loughlin as Special Agent —- (don’t want to spoil the first book for you!)

3 thoughts on “My next big thing – or rather, two things”