I have discovered a very cool writing resource. The Emotion Thesaurus: A Writer’s Guide to Character Expression, is pretty awesome. I love it. I mean, I touch it a lot, give it yearning looks, and glow when I gaze on it.

Okay, so that may be a little over the top as far as showing my emotion for it, but I think you get the picture.  In a world where editors pound the pulpit with the words “Show Don’t Tell,” we writers must consider each and every sentence we pen. Did I write that someone was frustrated? Buzz! Wrong answer. Instead, that person might show frustration by crossing their arms, clenching the jaw, or tapping a foot or fingers. Oh yeah. Now I’m feeling it.

Of course, too much of a good thing is, well, still a good thing, and I’ve found this book inspires some of my own ideas of what physical signs I give off that betray my emotions. As a former communication major, the critical nature of nonverbal communication was pounded into my head, so that’s a good thing to remember. If your character says, “That’s great,” after an impatient snort, well, that’s better than writing “he said sarcastically.” Editors hate adverby dialogue tags too. FYI.

Of course, I’m not the adverb hater that so many are. Stephen King killed this part of speech with his famous: “The road to hell is paved with adverbs.” Sometimes, my character says something softly. It’s not a whisper, it’s not a hiss. He says it softly. End of story.

But adverb wars aside, I think  the best way to approach the “Show Don’t Tell” is to think of your novel like a movie script. In script writing, you tell the director and actors what the character is doing while they speak. Obviously there’s some room for interpretation, but the concept is that actions speak louder (or at least, as loud) as words. When I write a scene, I picture the people interacting in my head, and if the behaviors are hard to grasp, I close my eyes and think of myself either doing the motion or saying the words. Having a thesaurus for common emotions, of course, is icing on the cake. And I really, really like icing.

So check out The Emotion Thesaurus if you’re serious about improving your style and characterizations. And if it makes you happy, don’t forget to smile and step lightly:)

The Emotion Thesaurus: A Writer’s Guide to Character Expression
By Angela Ackerman and Becca Puglisi 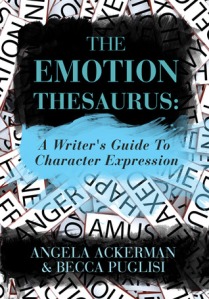 3 thoughts on “My new love – The Emotion Thesaurus”