So, I just finished The Giver. After numerous students from several of my school visits named it as their favorite book, I felt remiss, as a teen author myself, at having not read it. At first I was excited that it was going to be a short read (because let’s face it, teen fiction just seems to get longer and longer–except my stuff, of course;-).

Then I read it. And, oh yeah, that book deserves all the hoopla. I have to admit I was a little taken aback at the speedy ending. I mean, it really could have been drawn out. But I guess I  like the fact that it wasn’t. The transmission of memory was a little hard to grasp–I mean, the curious part of my mind wants more explanation. But I’ll give the book the kudos it deserves. 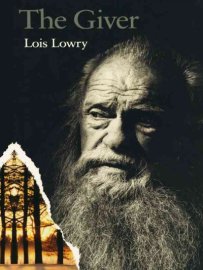 I definitely see some recent books that take a page out of The Giver. Condie’s Matched, Oliver’s Delierum, and Roth’s Divergent all carry the same tune. Also, I’m a fan of Ira Levin’s This Perfect Day, which shares some similarities as well. As I tell my writing workshoppers, there is no new idea under the sun. It’s just the way you tell the story that’s unique. That’s why the publishing industry can support fifty zillion romance novels, am I right? You know I am.

So, at the risk of jumping on the same train as everyone else (and having lived in big cities, I definitely know how that feels), I say give The Giver a read. It won’t take you long, and you’ll understand why it’s such a big hit. Then, if you’re hooked, I swear there’s plenty of dystopian lit out there to keep you busy for a while.